I never really thought about joining Greek life, until the summer before college…

I was a waitress where almost everyone that worked there that summer was apart of Greek life at some point in their life. Nobody from my high school was really big on the whole Greek thing, so there was never really anyone to go to for reference on it, so when all of a sudden I had people all around me talking about it at least once a day, it started a thought in my brain. They all told me I should go out because I would love it!

Fast forward to my college freshman year. It is the fall semester and of course, you can’t pledge, rush, whatever you want to call it, first semester because you don’t have a GPA yet and you need one to join. (Grades are always first) Whenever I met someone in Greek life that semester, I was highly intrigued and couldn’t stop asking questions. One of the clubs that I did join, photo club, had another member already in my current sorority and other members apart of fraternities. They always talked about their “brothers” and “sisters” and it made me miss my sister at home and all my friends. That made me want to join another “family” even more.

I didn’t really know what I was getting myself into. Unlike what I usually do, I did no research and had not a clue what was going to happen. I went out with one of my friends and we were separated into different rush groups (I don’t really know what they are called haha). There I had a Rho Gam to help me through and I was with about ten other girls going through the same thing as me, which made it so much easier.

Why did you go out for recruitment or want to? 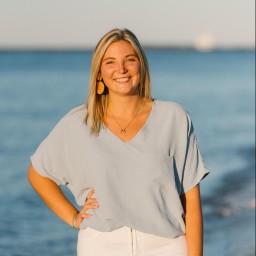 I'm Marina, a twenty-something year old blogger from New England. Here you'll find college advice, style posts, lifestyle content and if you hit the contact button, a new friend! Grab a cup of coffee, take a look around, and be sure to follow along!

@TSGNantucket Volume 2 is officially here! 💙🍾 I am excited to be a part of such an amazing and supportive community. I can't wait to see what Nantucket has in store for us this year! ✨ I've called Nantucket home for my whole life and I honestly couldn't think of something better than being an advocate and ambassador for the small businesses that fill up this guide and make Nantucket truly unique and special! 🤗 @sleuliette and myself will SEE YOU AROUND TOWN! 👋🏼💙 #tsgnantucket #nantucket #supportlocal
Miami 2021 vs. Spring Break 2017 in Cancun 🌴🍹
First Sunday Funday of the season in the books ☀️🥰
@baryoshinantucket is open for the season! Thank you for having us for your soft launch via @tsgnantucket 💗🍣 Everything was DELICIOUS! We can’t wait to come back!
Peace out, Miami 🌴 It’s been real ✌🏻
The first actual vacation I’ve taken in 3 years #signedoff #ooo